WHEN WILL WALL STREET'S BUBBLE BURST? 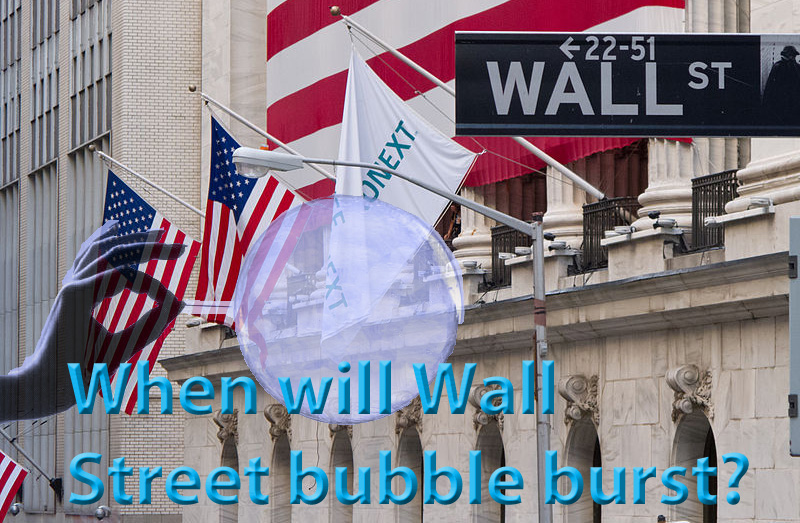 PHOENIX - With each year of the bull market, "America the beautiful," the "land of the free," has been getting less beautiful and more enslaved by the owners and operators of the Wall Street casino. This dangerous trend, now in its fifth decade, has been accelerating in the 1990s. In its wake, a once proud nation of producers and entrepreneurs is being transformed into a country of gamblers and dimwits, as the Wall Street bankers and brokers are wagging the tails of the nation's business principals and shareholders.

Leading the charge to the precipice are America's modern day lemmings - the Baby Boomers - the "white slaves" of the New World Order. They are spending themselves out of house and home, lured by the thrill of the (gambling) game, and suckered into a false sense of prosperity by the paper gains of their stock portfolios.

It has all happened before. Many times, in fact, in the history of Homo Sapiens, who rarely seems to learn from history or from his past mistakes.

Corrupt rulers try to govern by corrupting the hearts and minds of their subjects. For a while…

Remember the ancient Sodom and Gomorrah story, for example?

Or "panem et cirsenses" ("give us bread and games") - the way the last Roman emperors ruled their morally corrupt citizens. Until eventually the bread ran out, and the games turned into rebellions which destroyed their pot-bellied empire.

The same trends are at work in modern-day America. The Wall Street casino is the Coliseum stage. The Big Business financial elite, the "Princes of the 20th Century," are the pot-bellied Roman aristocrats. The Baby Boomers are the "middle class Romans," comfortably seated as spectators at the Coliseum. The rest of the Main Street Americans are the "extras;" the pool from which the gladiators are chosen.

But there is one 20th century innovation. It is typically perfidious, to go along with the "interesting times" (a Chinese curse) in which we live. In modern-day America, it is the gladiators who are mostly funding the games.

And thus, their own demise. Consider the evidence…

Income Taxes. Ever since the 16th Amendment, the Wall Street's "vulture capitalists" have been gradually tightening the noose around Americans' collective necks. The income tax, for example, is NOT these plutocrats' God-given entitlement, as some would have us believe. It was enacted only in 1913, after much debate and treachery, 137 years after this Republic declared its independence from the British crown.

At the time, the entire U.S. income tax law was 17-pages long. Today, it has grown to over 3,000 pages. More business opportunities for the politicians, lawyers and accountants; more financial tyranny for the taxpayers - the New World Order's "gladiators."

For example, even as late as the 1930s, the beginning of the socialist (FDR) era in America, the individuals' income taxes accounted for only 1.4% of the U.S. GDP. The corporations, on the other hand, bore a bigger 1.6% burden. No longer. In 1990, for example, the respective individual/corporate GDP shares were 8.8% and 2.0% respectively - a six-fold increase for individuals; only a 25% rise for the Princes.

But perhaps the greatest income tax scam was how the FDR (Roosevelt-Democratic) administration and Big Business used World War II to push through a "temporary" wartime emergency legislation. It was a law requiring employers to collect income tax at the source - thus becoming government agents without compensation.

This communist-style legislation turned on its head the American legal principle - "innocent until proven guilty." It gave the Internal Revenue Service (IRS) the rights which the U.S. Constitution accords a defendant, while putting the burden of proof on the taxpayer, the "plaintiff." Half a century later, this FDR income tax ruse has given a whole new meaning to the term "temporary."

Such a "socialization of America" enabled the Big Business elite to install a direct line into our wallets, sucking out our money practically at will, like a giant vacuum cleaner. I call it the "Great American Hoover."

Another element of the moral corruption which has fueled the supposed Wall Street "bull market" has been a betrayal of the U.S. taxpayers' interests by our "elected" (read - "bought") officials. Back in 1950, for example, the state and local governments' pension funds weren't allowed to gamble away their contributors' retirement on something as risky as a stock market casino. Consequently, their share of the U.S. equity in 1950 was - zero. At the end of 1997, however, the state and local government funds' have reached $1.3 trillion, or 10% of the total U.S. market equity.

Private U.S. corporate pension funds have also added to the stock market cash flows, surging at a 17% compound annual rate since 1950 to $1.8 trillion in 1997, the fastest growth rate of any institutional gamblers.

The banks' personal trusts, while still a relatively small (only 2% share) of total equity, were another net new factor in transforming America from a land of producers/entrepreneurs to a country of gamblers/dimwits. As was the federal government's excessive spending which has turned our country into the world's biggest debtor nation - to the delight of the Wall Street bankers, of course.

Meanwhile, when will the Wall Street dam burst, as all dams must which are held together by corruption and deceit? When the panicked Baby Boomers realize that they have been building their retirement house out of a deck of cards.

In 1950, for example, there were 16 American workers for each recipient of social security. Today, there are 3.2 workers per each retiree.

In other words, There are more than five times as many unproductive Americans today as there were 47 years ago. The Board of trustees of the Social Security Trust Fund predicts that, by 2030, only two people will be contributing to the fund for each dependent retiree.

Assuming, of course, there is a United States of America by 2030. What if there were only some monuments left reminding us of "America the beautiful," the "land of the free," which it once was? Just as today, you can find similar imperial landmarks attracting the tourists in Vienna, Paris, Rome…

Which is why it is critically important for Americans who still believe in our individualistic, freedom-loving culture, based on hard work and entrepreneurship, to act now - before our ideals turn into statues. We still have the legal means at our disposal to throw off the Wall Street yoke, and to rid ourselves of our pot-bellied politicians - the Big Business's stooges.

All we need to do is apply our Constitution. Rigorously and unambiguously.

But do we have the courage to do it?

The following text was excised from the published WT column: Here is an excerpt from my last year's WASHINGTON TIMES article, "The Great American Hoover" (Nov. 23, 1997):

"Its one end is attached to Wall Street institutions' bank accounts; the other to Main Street's mattresses, piggy banks, retirement accounts and mutual funds. The Hoover's function is to methodically vacuum out the latter suckers' savings.

Where does the hogwash come from? From the White House. And other places. Like Wall Street." (with the Main Street providing the greed and gullibility).

In other words, while some Main Street gamblers let the Wall Street Hoover suck about 8% more money out of their wallets or mattresses for the last 47 years, the institutions kept pumping into the market the equity capital at a 15% compound annual rate. The result was a loss of market power for the Main Street suckers, and a surge of it for the Wall Street elite. As in any casino, it takes a gambling sucker to enrich the "house" through his greed or gullibility.

As a result, the U.S. stockmarket equities broke the bank by the end of 1997, the Southeast Asia and Russian crises notwithstanding. They reached a record, $13 trillion level.

Back to Index of Columns...